Take a look inside the Radisson hotel, 'an icon renewed' 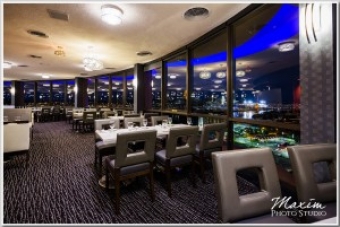 The Radisson Hotel in Covington is an iconic part of the Cincinnati skyline. It adds dimension to the drive down the Cut in the Hill, its lights change with the weather and who could forget the revolving restaurant on the top floor.

The Radisson unveiled its $5 million facelift on Thursday, showing off the new lobby, redone guest rooms, ballroom and its famous revolving restaurant.

Radisson's director of sales and marketing, said the group set out with one idea in mind, “an icon renewed.”

The lobby, formerly a space for the pool, was expanded and designed to be more inviting and trendy. Even the restaurant on the main floor, the Fifth, has been expanded and the menu has changed.

The Eighteen at the Radisson still has stunning views of Downtown and Covington but the large booths have been taken out, making more space for the view and giving it a brighter feel.

The redone top floor opened in April 2016 and the hotel has already seen great numbers since its opening.

“The richness and the history of the hotel  is still intact.”  “We just tweaked some things cosmetically and we made some things more appealing but we kept that tradition. We just took that view and expanded on it.”

The hotel owners wanted people to feel like the Radisson is a home away from home but with pizazz.

“The sky is the limit for us.”  “We want to reiterate to our community that we’re here, we have a hotel that they can be proud of and that our staff can be proud of.”